Summer Guide For An Idyllic Tour of Europe

Nothing beats a tour of Europe in the summer months—sunshine and good weather, endless opportunities for gorgeous photos, and so many destinations to choose from for an unforgettable holiday.

Since most Europe travel guides usually feature western-European countries like London, Paris, or Spain, our summer guide will showcase the best places to travel in eastern Europe instead.

If you’re a first-time traveller in eastern Europe, consider taking a Europe tour package or plan your idyllic tour of Europe with our summer guide!

Summer Guide For An Idyllic Tour of Europe

The summer months in Europe officially start in June and end in September. We recommend going in May to experience the best of both worlds: sun all day long and cool weather.

By May, most attractions are open (after winter)—in anticipation of the summer holidays—and it’s still early enough that crowds are smaller. The smaller groups and temperate weather makes it the perfect time to enjoy Europe. Without further ado, here are the best places to travel in May in Europe:

You may choose to begin your journey of Europe in Poland, making your way down to Slovenia. If you follow this list, we’ll hit five major cities in 5 countries, and you’ll be able to experience a myriad of cultures and experiences.

First up, Krakow city dated back to the 7th century and served as the capital of Poland from 1038 to 1569. Its rich historical significance means that the city has many unique sites.

Head to the heart of the city, Kraków’s Rynek Główny (Central Square), lounge with a cooling beverage in the square under the watchful eye of St. Mary’s Basilica, or shop at historic Sukiennice Cloth Hall (the exterior of the building itself is enough to make the trip worth it).

Don’t miss the chance to visit the first UNESCO World Heritage Site, Wawel Royal Castle. Located on Wawel hill, the castle has undergone many changes throughout its lifetime, resulting in a mixture of Mediaeval, Romanesque, Renaissance, Gothic and Baroque architectural designs in one building.

From Krakow, head over to the neighbouring Czech Republic via train or flight and land in Prague’s next city.

Ukraine notice: While neighbouring Ukrainians are fleeing to Poland, it is unlikely that the ongoing conflict will impact the city of Krakow. 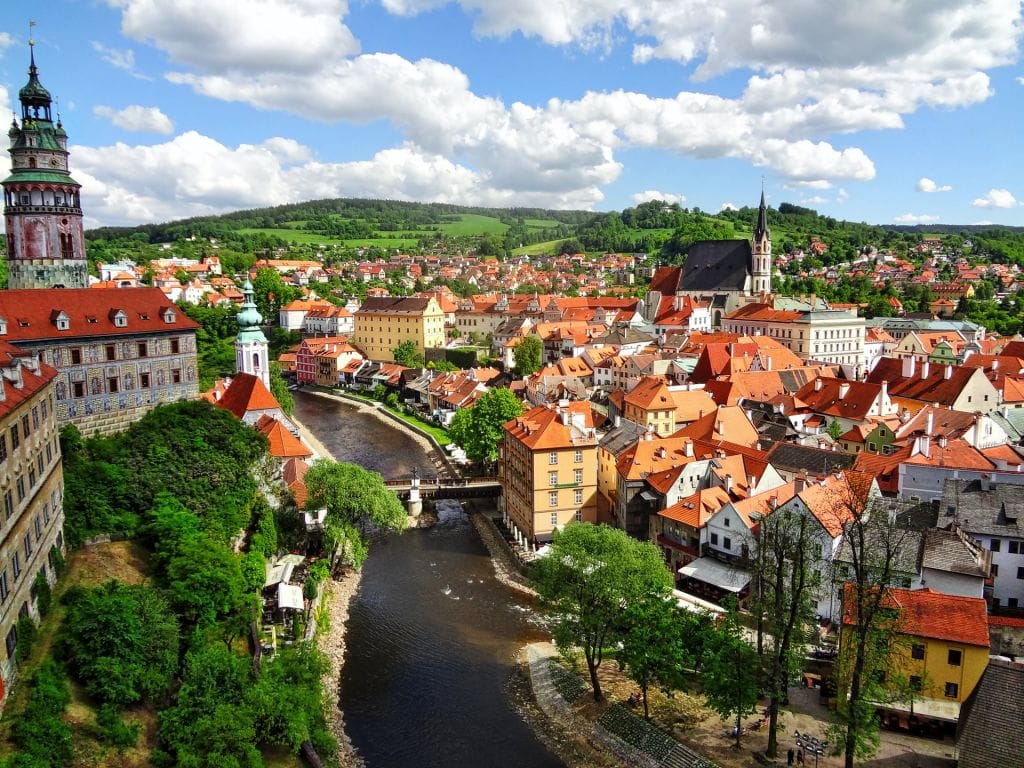 The city of a hundred spires boasts a cacophony of styles from medieval gates to Baroque belfries and Gothic church spires. The landscape of Prague is so well preserved that it has not changed since the 19th century.

Prague city is split into two parts by the Vlatava River, and you’d most likely have seen its many picturesque bridges that connect the city. Of these, the Charles Bridge tops the list in terms of its historical significance and aesthetic.

You can’t say you’ve been to Prague till you’ve walked across this bridge. Head towards the pristinely preserved Old Town Square from the bridge and stop by the Astronomical Clock. The oldest mechanical clock in the world puts on a show every hour that never ceases to amaze.

Walk back across the river through the Manes Bridge and head to the castle district to see the Prague Castle. The castle has been the seat of the Czech Republic’s rulers since the 9th century and now serves as the presidential residence.

Entrance to the grounds is free, but attractions within the castle grounds like St Vitus cathedral, Basilica of St George, and Golden Lane require a ticket. Nearby you can also visit the Strahov Monastery, which houses one of the most stunning libraries in the world.

Note on tipping: You are expected to tip at restaurants, and we’d recommend about 10% of the total bill.

Billy Joel’s ode to Vienna calls for you to slow down and look around your life with gratitude, and looking around the city, you’ll understand his sentiment. Mozart and Beethoven both owe their musical renown to the city and has been a breeding ground for the world’s most prominent composers.

The city offers more than just musical exports with things to do and places to eat for travellers. Take in the opera at the Vienna State Opera for as little as €10, climb the tower of St. Stephen’s Cathedral, and have brunch at one of the world’s most sought-after coffee houses, Cafe Central.

While we’re talking about food, sample the Vienesse Sachertorte at Hotel Sacher, a chocolate cake said to be invented by Franz Sacher for Prince Metternich in Vienna in 1832.

Once you’re satisfied with the food, Schonbrunn Palace, Hofburg Palace, and Belvedere Palace wait for you. The Schonbrunn Palace was Vienna’s answer to Versailles so expect grandeur in the grounds and within its walls.

Since it’s summer, take part in the Austrian tradition of baden-swimming. The Krapfenwaldbad offers a pool and a high-altitude view of the city.

Finally, walk down Graben, Vienna’s most famous street for shopping and luxury goods. Be sure to stop by Demel, a chocolatier and pastry shop established in 1786 and sample the Sachertorte or the apple strudel here—you won’t be disappointed.

Note on public transportation: There are no turnstiles, barriers, or checkpoints for public transport, but you must still purchase a ticket as plainclothes officers may request you show your ticket. 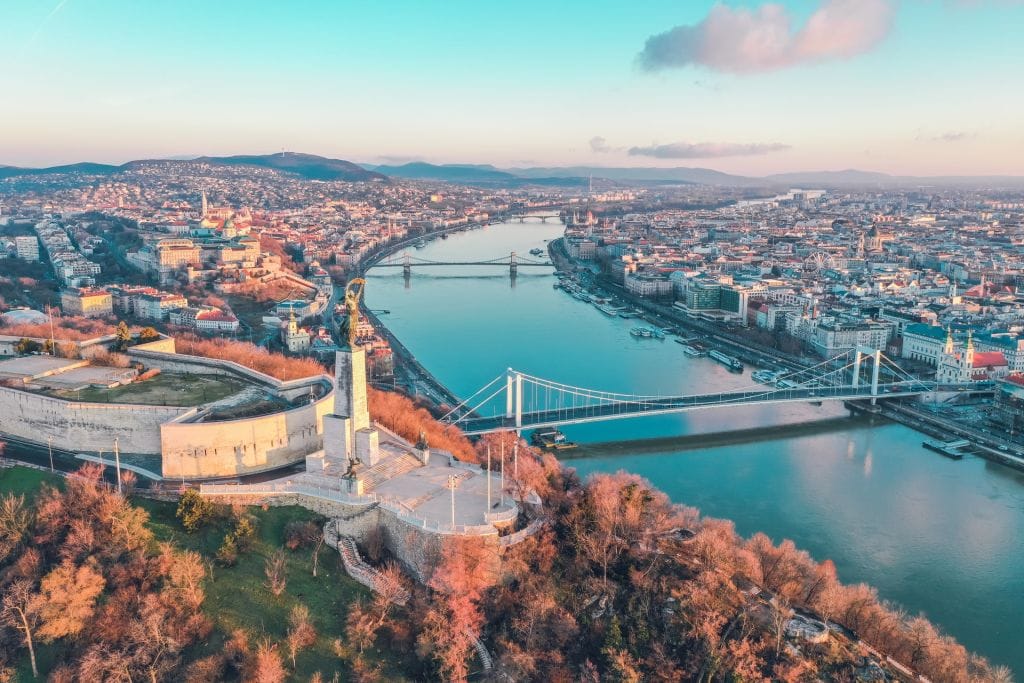 Made up of three unified cities, Buda and Obuda on the west bank of the Danube and Pest on the east, the capital of Hungary has received UNESCO World Heritage Site status at the Banks of the Danube, the Buda Castle Quarter, and Andrassy Avenue.

As the Banks of Danube are a heritage site, start your city tour here. The Danube Promenade from the Elizabeth Bridge to the Chain Bridge offers views of Buda Castle, the Liberty Statue on Gellert Hill, and the Fisherman’s Bastion—all of which should be on your list of places to go.

You can also take the city from atop a hill by riding the Buda Castle Funicular—open till 10 pm daily.

As we’ve mentioned earlier, Andrassy Avenue is a heritage site and its one of Budapest’s main shopping streets with many architectural landmarks like the National Opera House. The road leads to the Millenium Monument that hosts the Museum of Fine Arts and the Palace of Art.

Further down the road is what most tourists come to Budapest for, the Széchenyi Thermal Baths. The largest medicinal bath in Europe also features thermal pools, saunas, and steam rooms.

Soak in the waters day or night and supplement your relaxation with massages and various therapies. People often spend one day here alone to relax and recover.

Note on currency: While there are shops quoting Euros, they’re almost always more expensive than paying with the local currency, HUF.

We’ve kept the most idyllic and scenic location for last. Ljubljana (pronounced liyoob-li-yanna) is the greenest capital in the region and became the European Green Capital in 2016.

Built with Vienna Secession sensibilities by Italian-Austrian architect Max Fabiani, the vibrant city is lush and green with bright-coloured buildings.

Start the day at Preseren Square and cross the Triple Bridge towards Ljubljana castle. Seated atop a hill, visitors can either walk up, take the train, or use the funicular railway to get to the castle.

These attractions are centred around the Ljubljana river, connecting you to landmarks like the Central Market and Dragon Bridge. The bridge was the first of its kind in 1901, and four dragons stand guard around its exits.

The river is also the best way to enjoy the city, and river cruises are highly recommended. Since we promised greens, we’d also recommend taking a day trip to Lake Bled for a picturesque view of the lake surrounded by lush mountains.

The lake is only 40 minutes away, and there’s plenty to do here. Stroll around the lake at the 6km circuit, take a boat to the island in the middle to visit the Baroque Church of Assumption, or go up to the oldest castle in Slovenia.

Note on language: Nearly everyone speaks English, so don’t worry about brushing up on your Slovenian.

enjoy all these experiences and more with us

BOOK YOUR SUMMER TOUR OF EUROPE